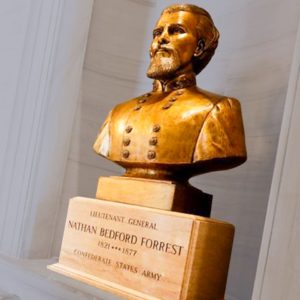 NASHVILLE—The House Democratic Caucus today is praising a decision by the Tennessee Historical Commission to relocate the bust of Confederate General Nathan Bedford Forrest from the State Capitol to the Tennessee state museum.

The commission today voted overwhelmingly, 25 to 1, to move that statue and two others to the museum where they will become the centerpiece of a “war heroes” display.  This ends a debate that has been going on for decades.  Dozens of people testified during the more than 6-hour meeting.  The vast majority of which supported moving the bust from its current location outside legislative chambers on the second floor of the Capitol.

Democratic Caucus Chairman Vincent Dixie said the move is long overdue: “This decision has been a long time coming.  For far too long, both lawmakers and visitors to the Capitol have had to endure walking past a bust honoring a disgraced Confederate soldier and a former Grand Wizard of the Ku Klux Klan.  That statute represents one of the most shameful parts of both American and Tennessee history and it was personally embarrassing to have to see it every time I walk into the House chamber.”

House Minority Leader Karen Camper said, “As a Tennessean, a black woman and a soldier, the bust of Nathan Bedford Forrest being in the Capitol has long been a personal and painful reminder of our past.  Every person who enters the Capitol—the people’s house—should feel welcome.  The State Museum is the appropriate place to discuss and study the life and exploits of Nathan Bedford Forrest.  He should not hold a place of honor in the State Capitol.”

Nashville Representative Harold Love stated, “I’m very pleased that the Historical Commission granted the waiver request from the Capitol Commission to remove the Nathan Bedford Forrest Bust from the State Capitol.  Today’s final administrative action by the appropriate governmental body affirms the work of so many people over the many decades.”

Representative G. A. Hardaway of Memphis added, “After the insurrection in Washington earlier this year, it was encouraging to hear the incredible amount of testimony from all of the young people standing up to support bringing down the bust.  It’s a small, but consequential step towards racial reckoning and eventually racial reconciliation in Tennessee.”

Members will be available this afternoon for interviews.  If you would to schedule an interview in person, via telephone or over Zoom, contact Ken Jobe at ken.jobe@capitol.tn.gov or (901) 277-0606.